Lost – Escape the island. A playful boardgame, developed and created with user experience in mind.

Lost – Escape the island. A playful boardgame, developed and created with user experience in mind.

As part of the bachelor’s degree, the subject of user and brand experience design should also be applied to other products apart from the digital media. Therefore everyone got the task to create their own board game.

Since it was not just a question of creating a beautiful design but of completely developing a board game, a lot of work had to be spent on brainstorming and research. After the idea was set, a logical game play had to be developed and rules laid down. In the last step, the game was designed and built. 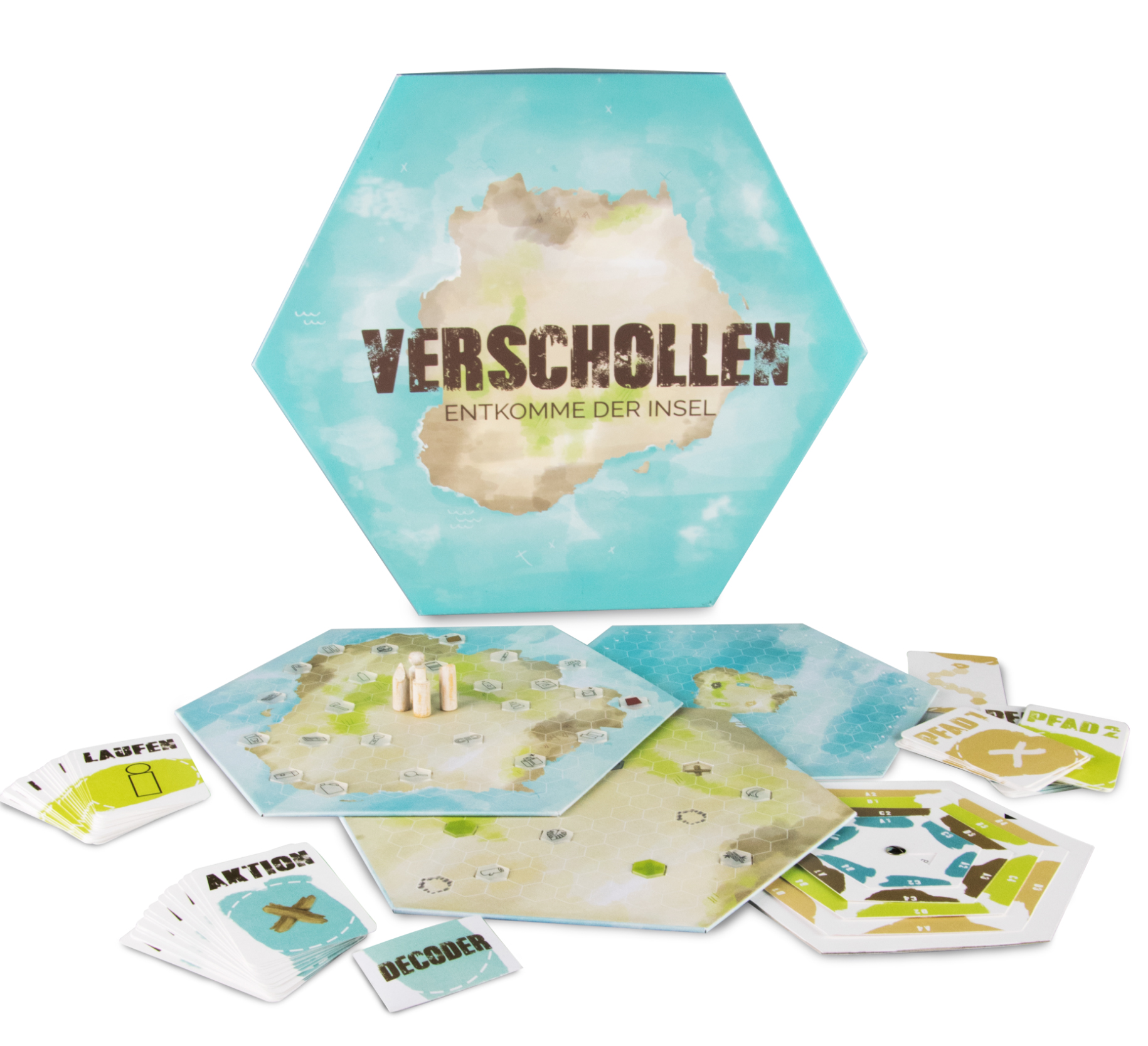 What does a board game need?

Before a game idea was developed, I looked into the areas game theory, game methodology and game didactics, to define what a good boardgame needs. A game is characterized by the game world, rules and game mechanics, the designer and the gameplay.

In the sense of game theory, a game is a decision situation with several participants as well as a composition of path and goal. The decisions of the participants can influence each other. Erich Weniger summed up this game didactic in one sentence: “Who should learn what, why, when and how?”

The creation of an idea.

At the beginning of brainstorming, different concept ideas were worked through, but only by linking several ideas, a game concept was created that could meet the above criteria.

So the idea of having the game take place on several levels was combined with the principle of a cooperative game and collecting objects in order to ‘escape’ from an adventure. To ensure a logical gameplay, path and goal the concept had to be played through and adapted dozens of times.

Type of game: board/card game, strategy game
Game didactics: Who? 14-99 years | Why? Increase of tactical abilities as well as the ability to work in a team, have fun with friends | What for? sociability | How? Problem solutions and approaches are developed by the players
Game Methodology: Discovering game
Game Theory: Cooperative game (as a team against the game)

The difficulties of developing a boardgame.

Although this project was something completely different from what I had done so far, user research and benchmarking were done here as well. As a result, the aspects below were targeted as main goals.

To achieve that the game does not get boring, it should be easy to extend. Therefor, the game was equipped with action cards, which could also be sold as expansion packages and the gameplay was designed to be easy transferable to other storylines.

In order for the game to make sense and fun, an interesting escape story was created that guides players through the game, helps them to understand what they need to do and stimulates their imagination of what it would be like to be stranded on a lonely island.

It was important, with the various stations and tasks players had to go through in the game, that they would not encounter any unsolved problems. Therefore, test persons were selected to play the game without external intervention or help in order to detect and correct possible errors.

Excursion:
What materials to use?

For an authentic game, the interplay of story, plot and appearance had to fit. Therefore, it was necessary to carefully consider and determine in advance which materials would be best suited.

So that the players are not given any tactics by the materials and their form, the game characters were chosen as abstract forms made of wood. Furthermore, the items that need to be collected should not have a given placement on the board. Therefore, transparent acrylic plates were chosen. In addition cards were used instead of dice to advance the tactics. 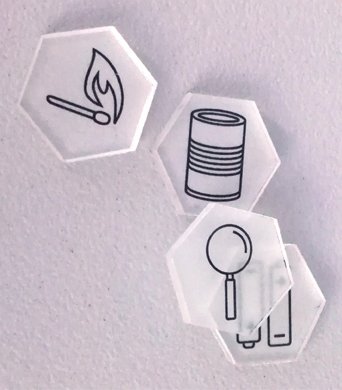 Sketching the levels and actions

In the course of the conception, the levels and the action fields on them were outlined to have a precise plan for the upcoming design process.

In order to visualize the levels and how the created design looks before actually building the game, a 3D view of the game was created using Cinema 4D.

Since the packaging of a game is very important, a concept had to be created and tested. After the successful assembly of a prototype, the print data for all components of the game were finally created. On the right side, the final print data without the design can be seen.

Sketching the levels and actions

In the course of the conception, the levels and the action fields on them were outlined to have a precise plan for the upcoming design process. 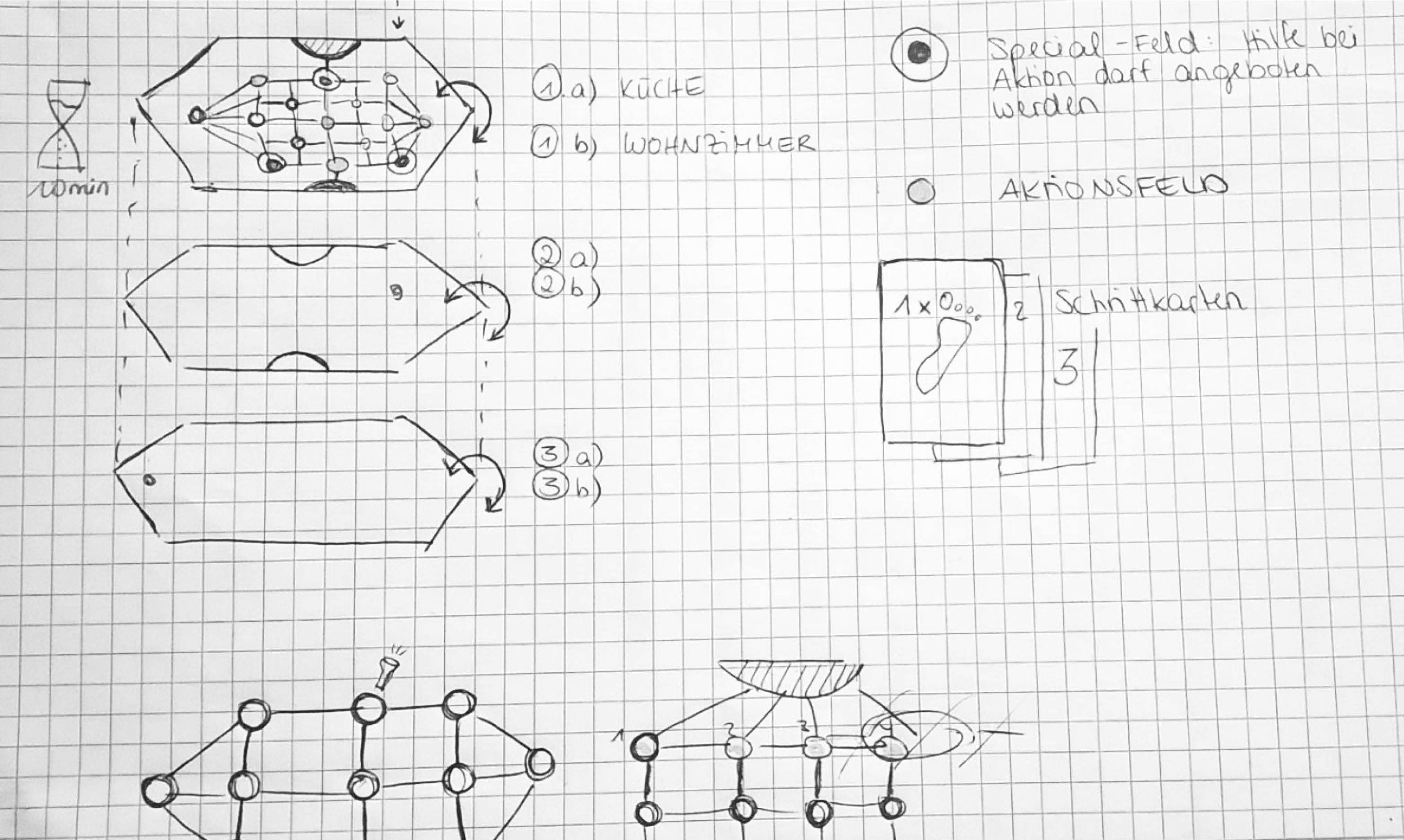 In order to visualize the levels and how the created design looks before actually building the game, a 3D view of the game was created using Cinema 4D. 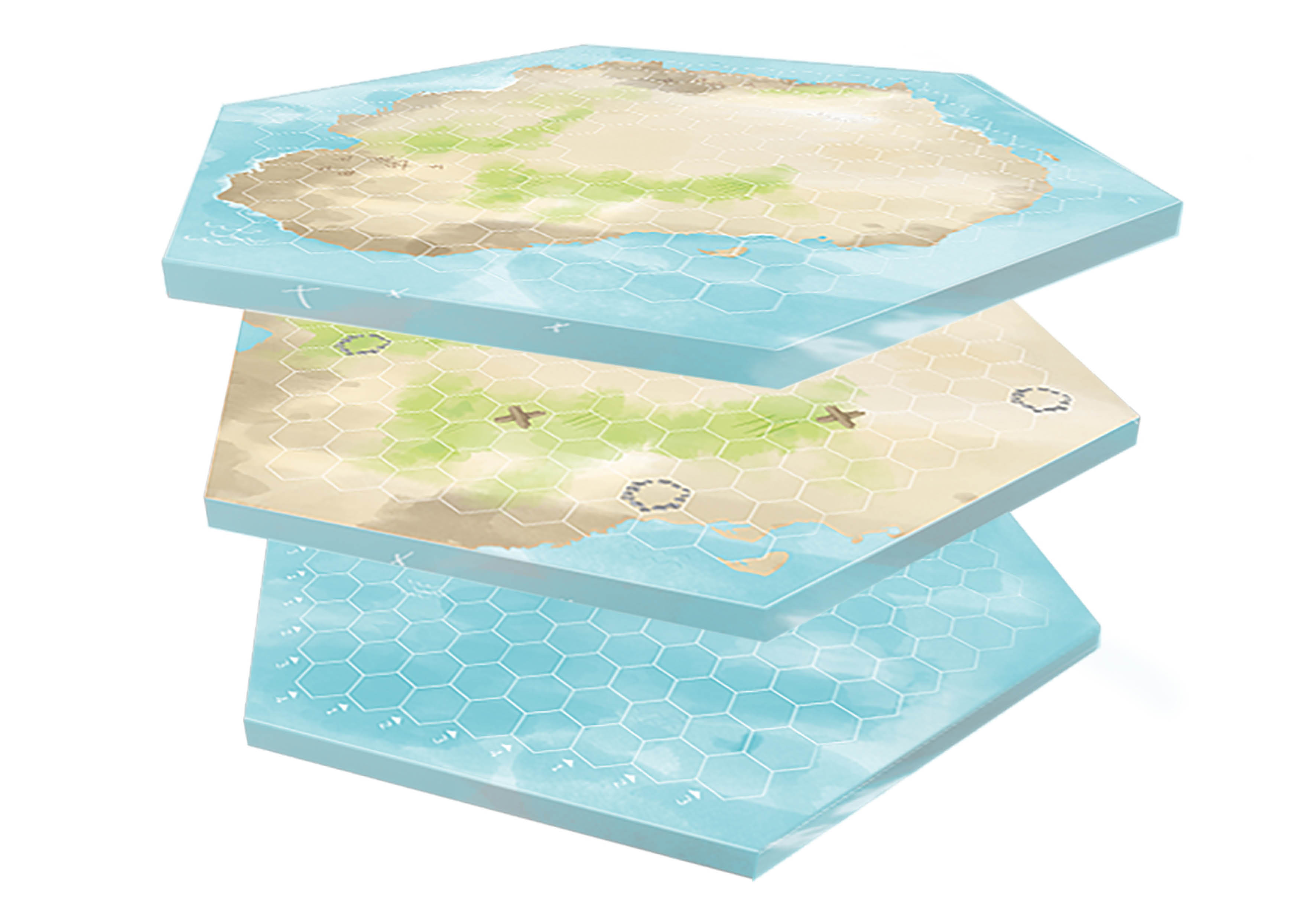 Since the packaging of a game is very important, a concept had to be created and tested. After the successful assembly of a prototype, the print data for all components of the game were finally created. On the right side, the final print data without the design can be seen. 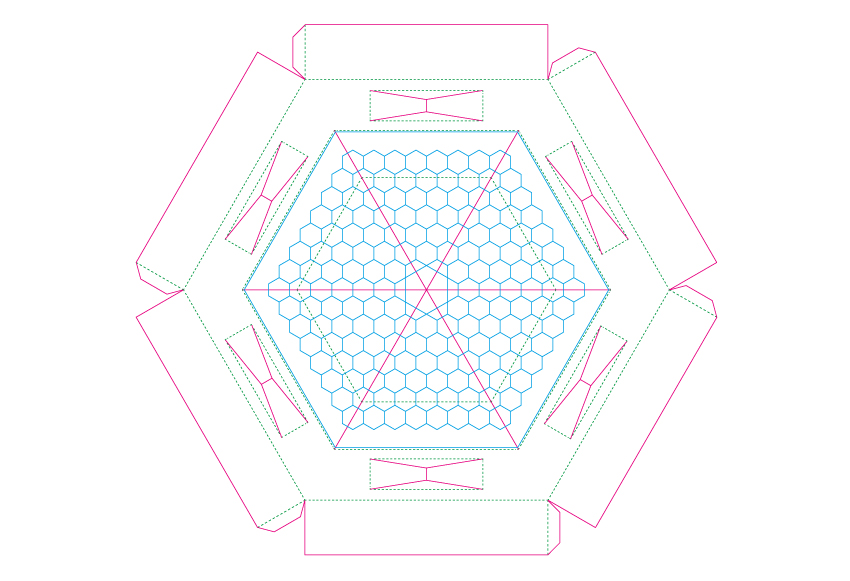 Complete the story with a matching design.

In addition to a logo, which should have a used-look, also a set of icons and a color palette were created. The game’s layers reflect the story of the lonely island and the color palette has been adapted to it. The icons had to be easy to understand and be easily recognizable in a small size. 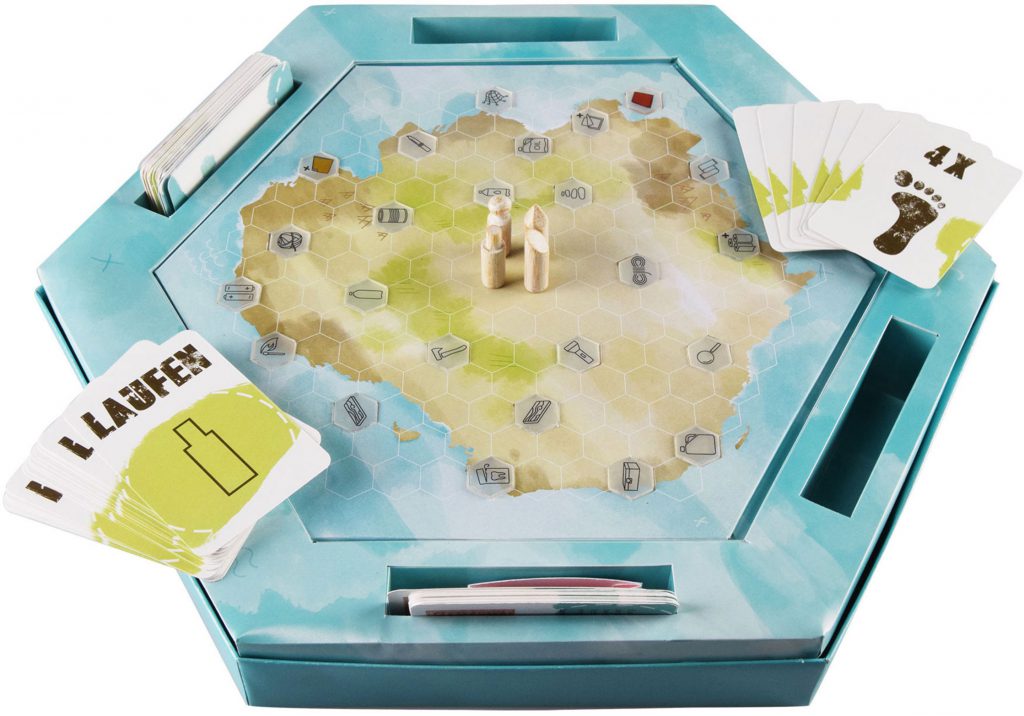 Secure your survival
by collecting items.

Master the tasks to move on to level 3.

If one of the players lands on an action field, marked with a ‚X‘, an action card is drawn. The items collected at the first level will now help you master the challenges you face. If the player who has landed on the action field can not master the challenge alone, the players have the opportunity to reach a so-called helper field within a turn. If you are sure you made it, pick up the detector, slide the action card in and see if you’ve used the right items to pass the action. 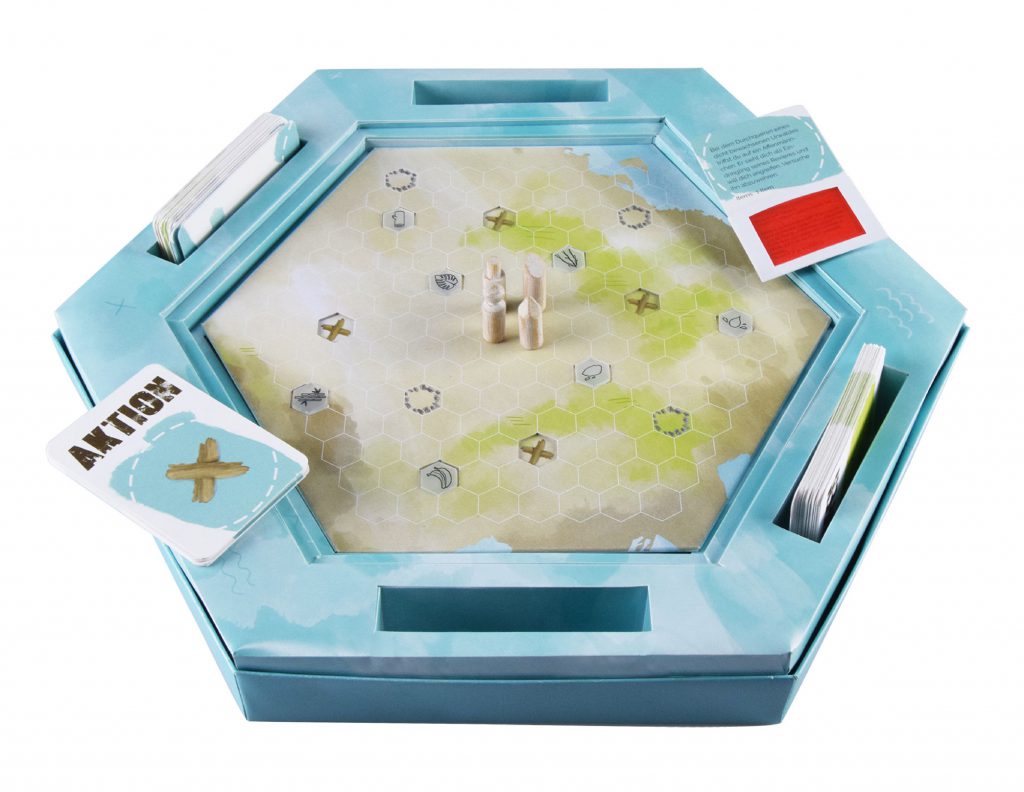 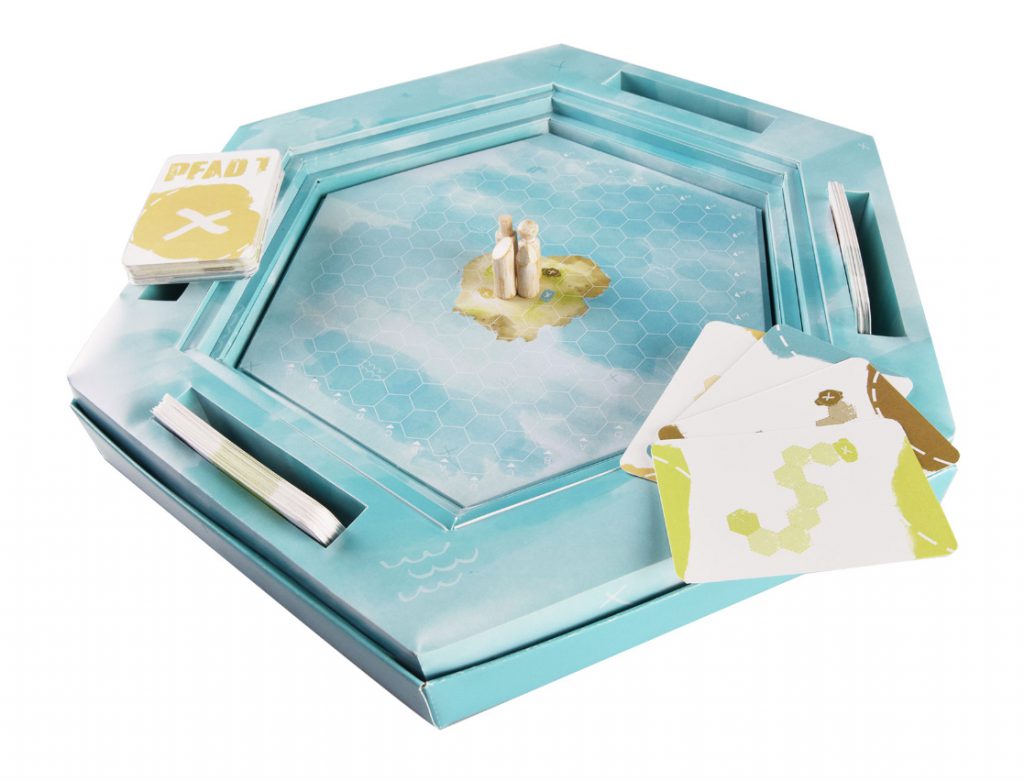 Escaping the island
is your only desire.

You show courage and want to sail over the sea towards home, but to determine the right coordinates everyone in the team is asked: Everyone was allowed to take a quick look at a path he had to go on this level. Only if you follow the right path, you will find out the coordinates at the end point, with which you will find the way home. With the help of a decoder you can then check your deter-mined coordinates. Are you sailing in the right direction or will you drown on the open sea?

When an idea becomes reality.

The process of building elements from scratch.

Defining the idea and the rules of the game was a big process of trial and error. It started with sketches and got more concrete with a 3D prototype. Another challenge, however, was to build all the elements from scratch, which not only took many hours but also cost nerves. 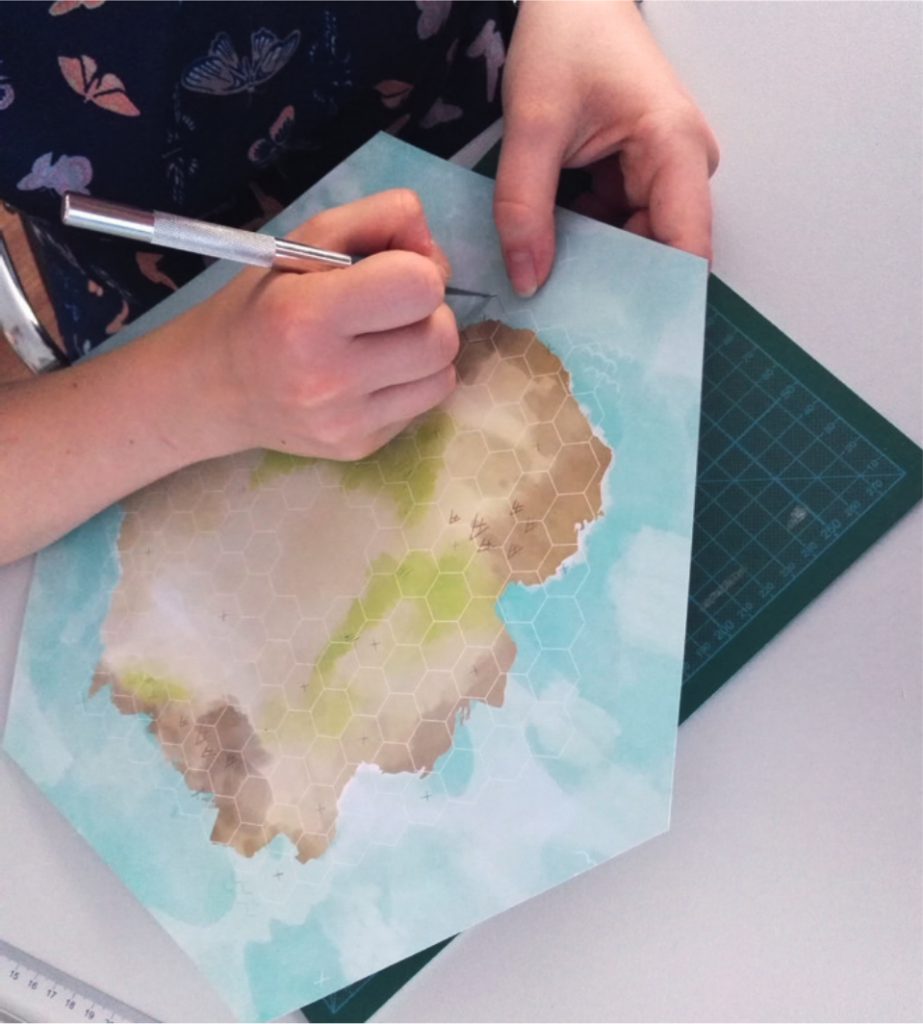 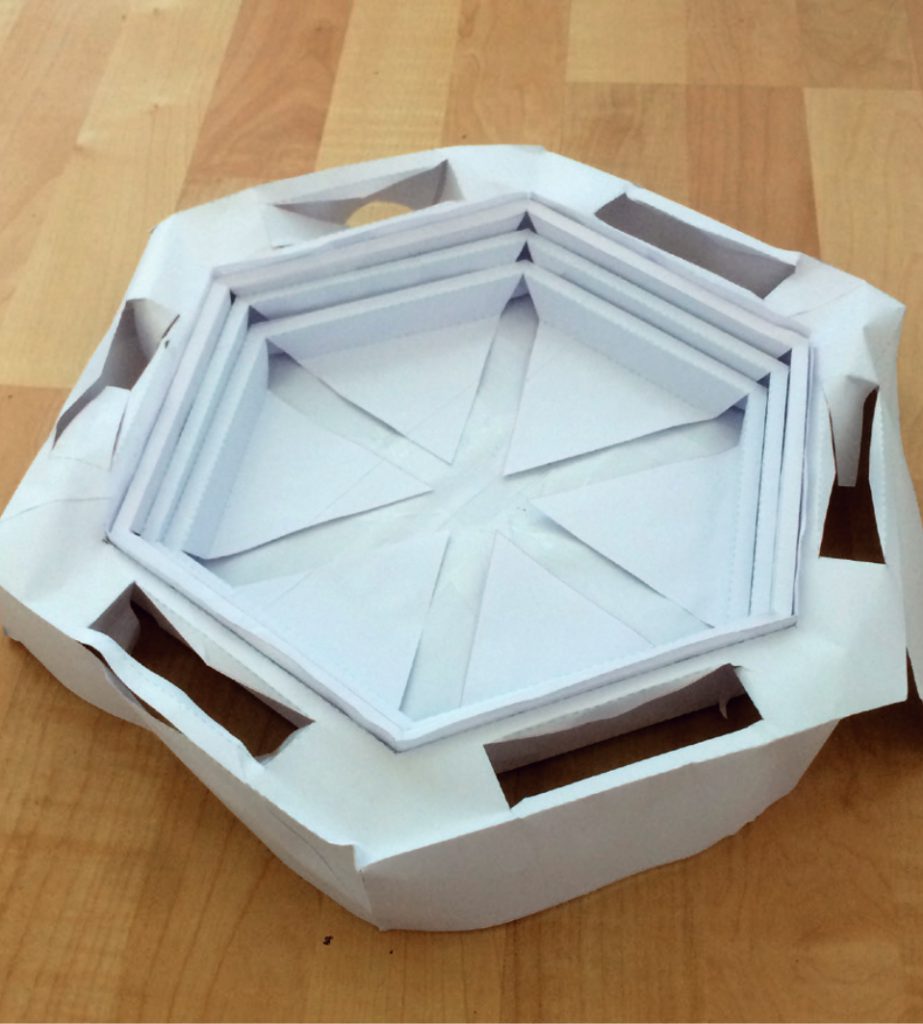 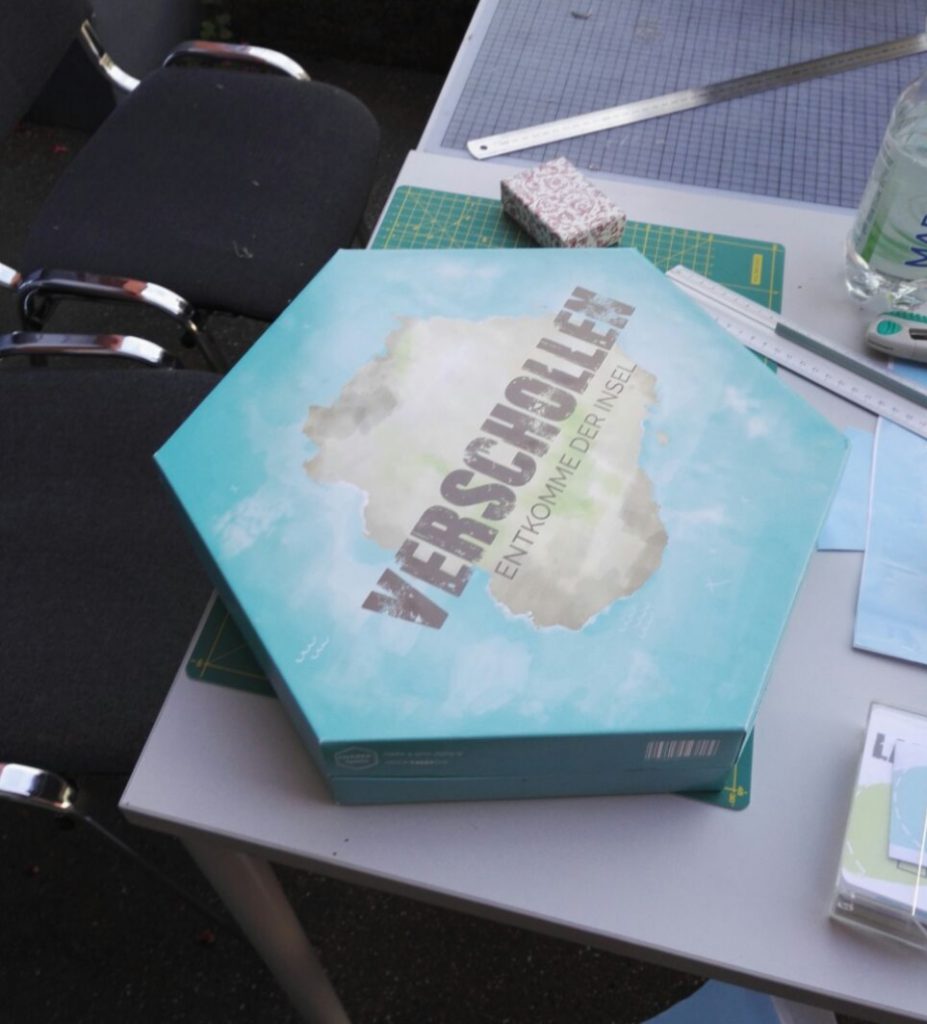 After the game was finished, it was exhibited at the college’s semester exhibition. For this, additional material was created to decorate the booth and adapt it to the game theme.

Get in touch with gaming companies

Since the game has been so well received by both the testers and the visitors to the exhibition, I made my way to a well-known games fair and presented the game there.

Fortunately, one company (Queengames) immediately found the game so interesting that a meeting was scheduled to took place at their company. We discussed what needs to be adapted to meet the market needs of Queengames and have been in contact ever since to bring the game to market in the future.

This website uses cookies to improve your experience while you navigate through the website. Out of these, the cookies that are categorized as necessary are stored on your browser as they are essential for the working of basic functionalities of the website. We also use third-party cookies that help us analyze and understand how you use this website. These cookies will be stored in your browser only with your consent. You also have the option to opt-out of these cookies. But opting out of some of these cookies may affect your browsing experience.
Necessary Always Enabled
Necessary cookies are absolutely essential for the website to function properly. This category only includes cookies that ensures basic functionalities and security features of the website. These cookies do not store any personal information.
Non-necessary
Any cookies that may not be particularly necessary for the website to function and is used specifically to collect user personal data via analytics, ads, other embedded contents are termed as non-necessary cookies. It is mandatory to procure user consent prior to running these cookies on your website.
SAVE & ACCEPT